Aikido in the Washington, DC area since 1973 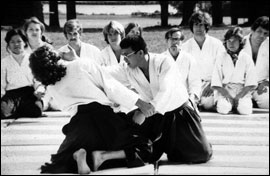 The Japanese word Aikido is written with three characters which translate as "the way of spiritual harmony." Aikido is a budo or "martial way," evolved in the tradition of Japanese warrior arts, yet has a unique approach to self defense... | more 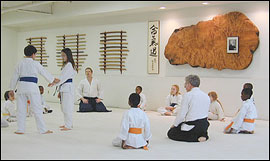 Visitors are always welcome to watch or take classes. Previous martial arts experience is not required. If you would like to try a class, just show up about 20 minutes beforehand and ask one of the waiting students or instructors about taking a class... | more

Capital Aikikai operates on a membership basis. If you practice at Capital Aikikai you are expected to pay monthly dues. Adult and student rates are available. Per-class mat fees are reserved for visitors from other dojo. | online payments 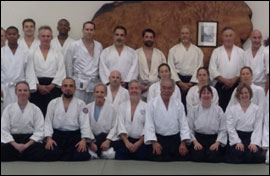 Capital Aikikai was founded in 1973 and has been providing a continuous program of Aikido training in the DC-Maryland-Virginia area ever since. Our founder, Clyde Takeguchi Shihan, began practice in his native Hawaii in 1958 and has been in the DC area since 1973... | more 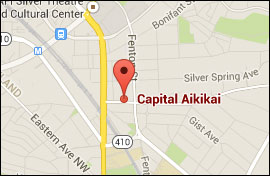 We are located in Silver Spring, MD, just north of Washington, DC. The dojo is easily accessible by car, bus, and Metro (subway). | more

The Nature and History of Aikido

The Japanese word Aikido is written with three characters which translate as "the way of spiritual harmony." Aikido is a budo or "martial way," evolved in the tradition of Japanese warrior arts, yet has a unique approach to self defense. Aikido is more than a martial science of strategy and tactics, it is a discipline for training the mind and spirit.

Aikido was developed by Morihei Ueshiba (1883-1969), known to Aikido students as O Sensei (Great Teacher). As a young man, he overcame debilitating childhood illnesses through martial arts practice, eventually becoming a master of the sword,the staff, the spear, and the art of ju-jitsu. O Sensei also held strong Shinto religious convictions concerning the ultimate futility of conflict and the illusory character of victory based on strength. This internal contradiction, which drove O Sensei to adopt a life of austerity and rigorous training, was resolved through an enlightenment experience which led to the development of Aikido, a martial art influenced by a philosophy of universal harmony.

All Aikido techniques and movements are based on the idea of harmony. Aikido emphasizes blending with an attacker by moving in such a way as to neutralize the force of the attack itself and thus neutralize the attacker. This is done by using spherical movements which allow the Aikido student to deflect the attacker's energy while simultaneously entering close to the attacker; "to blend with the attack," and so neutralize it.

Properly executed, some techniques are spectacular, sending the opponent flying through the air. Others are more subtle: small deft movements that immobilize the aggressor. Both results are achieved not through the use of brute strength, but by blending and neutralizing the attack, followed by circular and flowing techniques to unsettle the opponent, and completing the movement with a throw or immobilization. Because great strength is not required, Aikido can be practiced by men and women of all ages.

Aikido training has also been shaped by its philosophy of harmony. There are no competitions or tournaments in Aikido. Rank is awarded through a testing procedure which emphasizes self-discipline, rather than the mastery of others. Daily practice focuses on the development of technical skills and awareness through the constant repetition of techniques in a controlled environment in order to master the fundamentals of moving, timing, and breathing.

Most practice is done with a partner: each working at his or her own level of ability, alternating as uke (the attacker) and nage (the one who is attacked). Both roles are stressed; each contributes skills that enhance overall sensitivity and control.

Wooden practice weapons — a sword (bokken), staff (jo) and knife (tanto) — are sometimes used in aikido training, not to understand how to use the weapon, but to better understand the techniques and movements of aikido itself.

Students train to neutralize the energy of the opponent's attack and to redirect and focus it into techniques of martial efficiency and power. At the same time, the student can use the same philosophy to deal with stress and conflict in daily life, and learn to remain calm under all conditions.

The final aim of Aikido is to integrate physical and mental training to develop a confident person who can think clearly and react instantly on and off the mat. It is only through constant training that an Aikidoist can acquire the habits of mind which make this integration possible.

In Aikido, such an integrated person is said to be "centered." A centered person displays a confident and relaxed posture, and centering gives Aikido movements their appearance of grace and simple elegance. Thus, Aikido training helps a student to become calm and centered and enables the student to deal with stress and aggression in an efficient and decisive manner on the mat, at home, at school, or at work.

Capital Aikikai was founded in 1973 and has been providing a continuous program of Aikido training in the DC-Maryland-Virginia area ever since. As a not-for-profit corporation, it welcomes all people who wish to practice Aikido. Click on the photo to see images from our first 40 years of practice in the D.C. area. 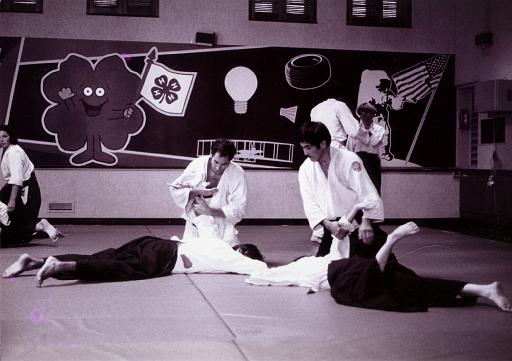 How to Begin Practicing at Capital Aikikai

Aikido is a very open and inviting martial art. Previous martial arts experience is not required to begin practice, and at all levels, you'll find aikido practice to be quite social and cooperative. In aikido we practice with each other, not against each other.

Visitors are encouraged to stop by and watch classes or, if you prefer, to take up to three classes at no charge. If you would like to take a free class, you should approach one of the students (before class begins), introduce yourself and sign a waiver. That's all! You can then take the class. You'll need to wear a dogi or a pair of sweat pants and T-shirt (no shorts or jewelry, please). Changing rooms and showers are available.

Classes are ongoing; new students simply begin attending the classes they prefer. For the first class or two you will receive personalized instruction, generally from one of the dojo's advanced students. Very soon afterward you will be practicing with everyone else in the class as a regular student.

It helps to be in reasonable physical shape, but this is not a requirement. As you continue to practice, you will begin to achieve increased flexibility and balance, and better breathing.

There are no contracts or long-term fees at Capital Aikikai. New students are entitled to three free classes. After that, you would have to pay either a daily mat fee ($15 for each day you practice) or a monthly membership fee ($80 per month). If you plan to practice more than twice a week, the monthly rate will probably be more practical.

Aikido is a martial discipline for training the mind and spirit. Aikido does not stress competition, but emphasizes a win-win situation that helps develop a spirit of harmony and cooperation, mutual respect and consideration for others.

From a technical standpoint, Aikido is basically defensive and oriented towardrolling, joint locks, flowing movement and control of balance. It is not "rough," and in fact appears to be quite smooth and graceful to first-time visitors.

What is aikido training like? What can I expect?

Aikido is basically oriented toward rolling, joint locks, flowing movement and control of balance. Weapons training emphasizes the basic postures and stances that are a fundamental part of aikido.

When you visit or begin your training, you will learn the most basic — and important — things first: how to roll, how to stand properly, etc. As you progress you will begin to learn the fundamental movements from which techniques develop. During a typical class you will practice with a variety of partners, of all skill levels.

You do not need to be in excellent aerobic or muscular shape to practice aikido, but as you progress you will find youself becoming more healthy and fit.

When is Capital Aikikai open?

Can I watch or try a class?

Yes! Visitors are always welcome to stop by and watch or take classes. If you would like to try a class, just show up about 20 minutes beforehand and ask one of the waiting students or instructors about taking a class. Generally, first-time students are given personal orientation and instruction by one of the dojo's yudansha (black-belt students). New students are welcome to any of the general classes. You do not have to call ahead or make other arrangements.

What type of people train in aikido?

All kinds of people train in aikido — men and women, young and old, even children. Because aikido is based on balance and circular movement, strength and size is not particularly important in training. In fact, women often have a natural affinity for aikido because, unlike men, they often do not have to unlearn forceful or muscular habits in their movement.

One unique feature of aikido training is the mixing of all skill levels.

Do I need special clothing or equipment?

If you want to try attending a class or two, simply bring loose-fitting clothing such as a T-shirt and sweat pants. Be sure to remove any watches, jewelry, etc. before stepping on the mat. The aikido "uniform" is a judo-style dogi, available either from us or from various area martial arts equipment suppliers, as are wooden practice weapons. Showers are available in both the men's and women's changing rooms.

Typically we train in bare feet, on a canvas-covered mat.

How much does it cost to train?

Those practicing regularly at the dojo are expected to pay monthly dues. New or prospective members may take three classes free of charge. There are no hidden fees, term limits or contracts.

• Mat Fees: For visitors the suggested mat fee is $15/day. If visiting for two or more weeks, visitors are asked to pay monthly dues.

Capital Aikikai is located at 923 Sligo Avenue, Silver Spring, MD 20910. Our Metro stop is Silver Spring (Red line), and we are a 10 minute walk from the station. Please use the map below for Metro, bus, walking or driving directions. One note: The dojo entrance is not on Sligo Avenue itself, but in the alley just north of it, off Mayor Lane.

There is ample parking directly across from the dojo entrance, in the Fenton Street Village parking garage.